Associate Dean Tracey Brame Selected as Lawyer of the Year

Michigan Lawyers Weekly named WMU-Cooley Law School Associate Dean Tracey Brame as Lawyer of the Year. In February, Brame and WMU-Cooley graduate Michael Rutkowski (Fitzgerald Class, 2006) of Rutkowski Law Firm in Bloomfield Hills, were two of 30 lawyers named to Michigan Lawyers Weekly’s “Leaders in the Law” Class of 2020. Because of COVID-19, the annual presentation was moved from April and held virtually on Aug. 3. 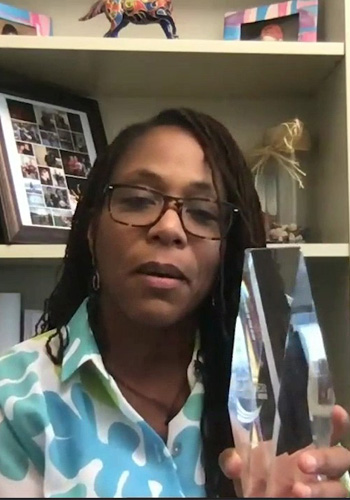 Brame was selected as Lawyer of the Year by members of the Leaders in the Law Class of 2020. The selected honorees for the Leaders in the Law Class were chosen for their outstanding contributions to the practice of law in Michigan, continually setting an example for other lawyers, demonstrating tremendous leadership, and offering a wealth of expertise in many areas of the law.

“I am so humbled and so overwhelmed to be considered among Michigan’s Leaders in the Law by Michigan Lawyers Weekly,” Brame said during her acceptance remarks.

Sharing how she became inspired to work in the area of social advocacy, Brame spoke about  listening to a presentation by attorney and social justice activist Bryan Stevenson.

“When he finished speaking, I was determined that wherever he was, that’s where I wanted to go,” Brame said. “And I was fortunate enough to go to Alabama for a semester and get experience in death penalty work alongside Bryan.”

Brame, who is passionate about criminal law and defense cases, has a strong disposition for advocacy work and feels there are far too many African Americans in prison who did not receive the appropriate legal representation. This belief has led her to become heavily involved in the Grand Rapids community, providing pro bono work that focuses on enriching the lives of the community’s youth.

In collaboration with the Kent County Probation Department, Brame also helped establish a Teen Court, offering an alternative to the traditional criminal justice system for first-time, nonviolent juvenile offenders. In addition, by volunteering with the 3R’s Program, a partnership between the Grand Rapids Bar Association and Grand Rapids Public Schools, Brame has helped promote respect and understanding of the rule of law and the Constitution, as well as, provide mentorship and career direction for students.

“I have been fortunate enough to have this wonderful career where I happen to be doing work that I absolutely love, but also has been impactful on the community,” said Brame.

WMU-Cooley Associate Dean Michael C.H. McDaniel, who nominated Brame to be considered as a member for the Leaders in the Law Class of 2020, said Brame’s selection as Lawyer of the Year is deserving because of her leadership by example.

“There was a full slate of 30 attorneys who were recognized Monday evening as Leaders in the Law,” said McDaniel. “Half are partners at the most prestigious firms in Michigan; five of them are the managing partners of those respected firms. Our own Grand Rapids Associate Dean Tracey Brame was selected as Lawyer of the Year, by this group. The reasons are simple: her bright, shining social conscience is a beacon for all to follow and her life of service is an example for every lawyer.”