During a virtual ceremony on Sept. 3, Ret. Brigadier General Michael C.H. McDaniel, associate dean and professor at Western Michigan University Cooley Law School, joined 18 Michigan attorneys as they were inducted into the Michigan Lawyers Weekly Hall of Fame Class of 2020. 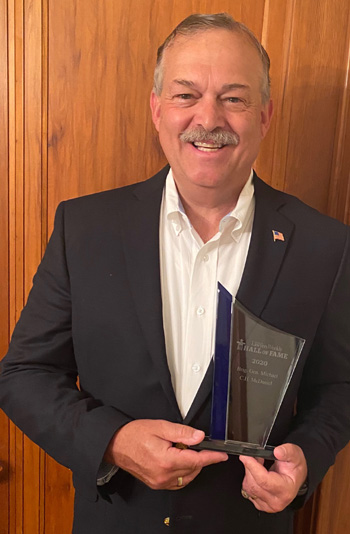 The award recognizes Michigan legal leaders over the age of 60, or who have practiced for 30 years or more, for their successful careers and valuable contributions to the community.

“It’s not only an honor to be recognized and inducted into the Michigan Lawyers Weekly Hall of Fame, it is also a highlight of my legal career,” said McDaniel. “I have been blessed to be able to serve our nation, the state of Michigan, and my local community. It is important for us as attorneys to place societal needs at the forefront of our careers and to make a difference, not only for our clients, but for the communities we serve.”

"General, Dean, and Professor McDaniel excels at all of his titles. As a former enlisted man myself, I knew that not many people can achieve the rank of General,” said WMU-Cooley President and Dean James McGrath. “Mike McDaniel is truly an exceptional leader, professor, and a great colleague. I was so happy to hear that he received this great honor."

McDaniel served at the Pentagon as deputy assistant secretary for Homeland Defense Strategy, Prevention and Mission Assurance, where he supervised the Department of Defense Critical Infrastructure Protection Program and Global Anti-Terrorism/Force Protection Policy. He also served six years as homeland security adviser for former Michigan Gov. Jennifer Granholm and served as assistant adjutant general for Homeland Security with the Michigan National Guard. McDaniel served as an assistant attorney general for almost 20 years, including as the assistant attorney general for litigation in the executive division of the Michigan Department of Attorney General for Attorneys General Frank J. Kelley and Jennifer Granholm.

"Some great person (Winston Churchill) once stated, ‘We make a living by what we get, but we make a life, by what we give.’ Michael McDaniel’s leadership of giving inspires and motivates WMU-Cooley’s staff and students,” said Professor Mable Martin-Scott, who nominated McDaniel to be considered as a member of the Michigan Lawyers Weekly Hall of Fame Class of 2020. “His life’s work is a glowing example of the good we can do when we give back.”