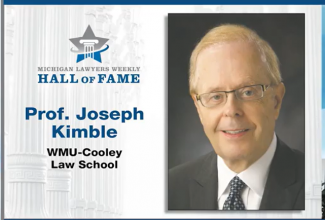 “It’s an honor to be named alongside some of Michigan’s top lawyers,” said Kimble. “I only hope I’ve had some success in moving our profession toward plain language. Writing, after all, is much of what we do, and for the sake of all our readers – including clients – we ought to do it well.”

The award recognizes Michigan legal leaders over the age of 60, or who have practiced for 30 years or more, for their successful careers and valuable contributions to the community. Kimble and 20 other hall-of-fame recipients, including Cook, will be honored during an online recognition program to be broadcast on April 13. Each honoree will also be profiled in a special supplement to an issue of Michigan Lawyers Weekly in April.

“I am honored to have a colleague and mentor like Joe Kimble,” said WMU-Cooley Professor Mark Cooney, who nominated Kimble to the Michigan Lawyers Weekly Hall of Fame Class of 2021. “Joe is, quite simply, a giant in Michigan legal education and in national and international legal circles. So many of Michigan’s best lawyers learned from Joe in the classroom, at his seminars and CLE presentations, and in the pages of the Michigan Bar Journal’s ‘Plain Language’ column, which he has edited for nearly three decades.”

Kimble was a staff attorney for the Michigan Supreme Court and Michigan Court of Appeals, later practiced law in Flint, Michigan, and joined the full-time faculty in 1984. He has published three books on legal writing and a children’s book. Kimble is also a past president of the international organization Clarity, served as the executive director of Scribes (the American Society of Legal Writers), is a founding director of the Center for Plain Language, and was on the board of the Legal Writing Institute. He has twice won a prestigious Burton Award for Reform in Law — in 2007 for his work in helping redraft the Federal Rules of Civil Procedure, and in 2011 for his work on the Federal Rules of Evidence. In 2015, he received the John W. Reed Lawyer Legacy Award from the State Bar of Michigan. 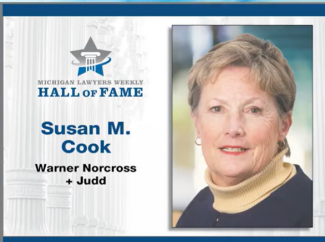 Cook is a partner at Warner Norcross + Judd LLP and practices out of the firm’s Midland, Michigan, office. Her practice areas include bankruptcy law, business reorganization, commercial litigation, and business transactions.