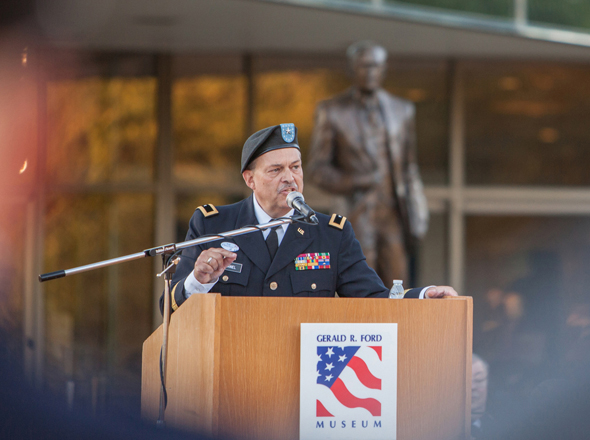 “Everyone remembers where they were on that day and yet when you hear the phrase 9/11, you don’t think of anything other than the events from 15 years ago,” said McDaniel.

“We say 9/11 and everyone knows what we feel and what occurred. It was a visceral deep pain.”

Speaking to an attentive audience, predominately of Boy Scouts and their families, police officers, firefighters, first responders, and those belonging to service organizations such as the Salvation Army and American Red Cross, McDaniel spoke about the courageous efforts of Father Mychal Judge, New York City Fire Department chaplain, and John O’Neil, a retired FBI agent who worked at the World Trade Center.

He said Judge and O’Neil, who chose to go toward the disaster zone 15 years ago and died trying to helping others, should be recognized as heroes like all individuals who serve to protect the U.S. Constitution.

“These men, along with the men and women who serve our country, whether in the service, police department, or fire department, are our nation’s heroes,” said McDaniel. We should not be confused with entertainers and sports figures who consume much of the time during national newscasts. They may be possible role models, but not heroes."