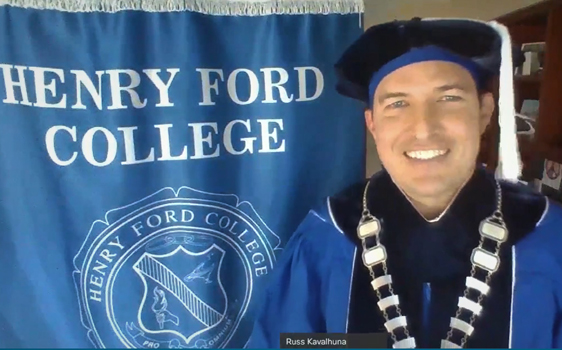 During his remarks, Petrakos, who attended the Lansing campus, reflected on the beginning of his law school journey in 2018. He said, “Dean (Mable) Martin-Scott told all of our eager minds at orientation that it will be over if you blink. What feels like two weeks, is two years later, three or four years for some of us.”

Petrakos, while speaking to the graduates, said, “Do not let anyone tell you that you can’t do something. You have come way too far in life to let others put you down. Fight for what you believe in, even if it means you have to fight like hell. Help as many as you can, as often as you can. Follow your gut and speak with a level of confidence that can’t be matched.”

Rape, of the Tampa Bay campus, said, “Thank you to all staff and faculty who pushed us further than many of us thought we could go. I remember our first year, you could tell by the look on everyone’s faces that we just got hit with the harsh realities of law school.” 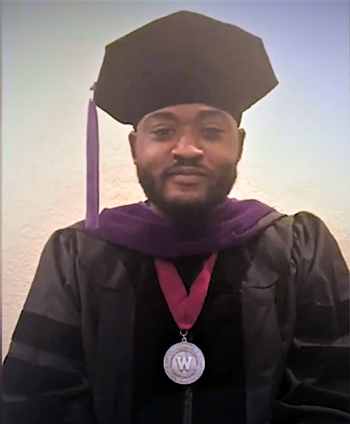 While addressing how law school adapted during the pandemic, Rape said, “We did the unthinkable and went online. We took this in stride and adjusted our study habits and overcame. We were the first set of law students to deal with online learning for a long period time. We set a new standard, a high standard, a standard we upheld and maintained our integrity in. We stayed strong and resilient in a terrible and trying time.”

In closing, Rape said, “I know the water in life gets extremely deep, but I know each and everyone of you will adapt, build a raft and press on to the shores of success.”

Kavalhuna, who worked as a clerk at the Michigan Supreme Court and as a federal prosecutor, said that, while working in these capacities, “A profound truth snuck up on me. It was that I was carrying this awesome responsibility of representing someone else, something bigger then me. It was the institution I was serving and it was the people who we served, and you will soon enjoy this truth.”

Talking about his time as a law student at WMU-Cooley, while also working as an airline pilot, Kavalhuna said, “I did three years of weekend classes, year around. Those three-hour sessions, back to back, on the weekend, they were rough.”

While sharing how his law school experience helped him through life and his career, he said, “I’m sure all of you have stories about how law school was a struggle, but that is good. It is that, the struggle, in that you learn one thing, Cooley might be the best in the country at teaching. It teaches you in life and in practice that you are going to have to make your own breaks. Like your time at Cooley, you have to grind and hustle, earn some respect and use all of the luck that comes your way. Your success is your own to make.”

Each class at WMU-Cooley bears the name of a distinguished member of the legal profession. Justice Ward Hunt was elected to the New York Court of Appeals in 1865. In 1872, President Grant nominated him to the U.S. Supreme Court.