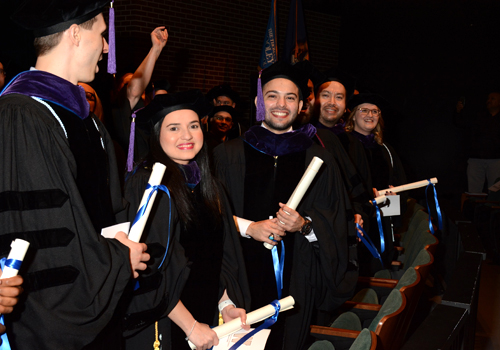 During the commencement ceremony, Arturo Alfaro, who was chosen by his classmates, provided the valedictory remarks. Cristina Corl, managing partner of Plunkett Cooney’s Columbus, Ohio, office and WMU-Cooley graduate and member of the law school’s board of directors provided the keynote address. The Stanley E. Beattie Award for Excellence in Teaching was presented to Professor Paul Sorensen.

While speaking to the graduates’ family and friends in attendance, Alfaro said, “We want to thank our families and friends because you suffered our absence from holidays, birthdays, vacations, family barbecues, and even talent shows many times during this journey. ”

Alfaro told his classmates that they learned many different things during law school. “When we began law school, we thought we knew what to expect, but not really. Who knew that briefing the first few torts cases would take eight hours? We learned that our faculty is a tremendous resource for support, that getting a book award is reserved for amazing and outstanding graduates, and most of us learned how to continue studying the law and perfecting our practical skills.”

Alfaro added, “But above all, I trust that all of us learned how priceless our reputation truly is, the weight of our words and actions, and the honor of following through with our commitments.

During the keynote address, Corl spoke about the importance of being nice by sharing what she called "Christina’s do's."

"When I say be nice, I mean be nice. A big part of a lawyer's job is to persuade other people, to provide information that will assist, and to help inform a resolution to the case. Very little of a lawyer's time is spent in court,” said Corl. “In most cases, issues are often litigated and resolved between lawyers. Set the example. Treat everyone with kindness and respect, not because they are nice to you, but because you are nice. People will forget what you said or did, but never forget how you made them feel."

Each class at WMU-Cooley bears the name of a distinguished member of the legal profession. This graduating class is named after U.S. Supreme Court Justice David Davis. David was appointed to the Supreme Court by President Lincoln in 1862. His tenure on the court lasted until 1877 when the Illinois General Assembly elected him to the U.S. Congress and he resigned his seat. He served in Congress until his retirement in 1883.