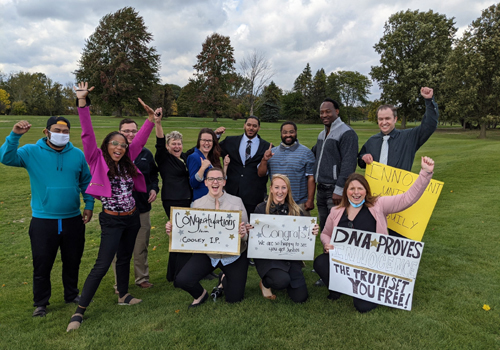 Hamilton was convicted of the murder of a Detroit woman when he was 21 years old. He served 26 years in prison. There were no eyewitnesses in the case and Hamilton's conviction was based, in large part, on the testimony of a jailhouse informant, who later proved to be unreliable.

During the Wayne County Prosecutor’s Conviction Integrity Unit investigation, biological evidence was discovered that was material to the identity of the perpetrator. The WMU-Cooley Innocence Project facilitated the DNA testing. DNA found under the victim’s fingernails excluded Hamilton and an unknown male contributor’s DNA was found. The DNA testing results, along with other new evidence in the case, established that Hamilton did not commit the crime.

“I’m a little overwhelmed right now,” said Hamilton, during the virtual court hearing. “I am extremely grateful and  look forward to being a productive citizen in our community.”

In 2018, the Wayne County Prosecutor’s Office and the WMU-Cooley Innocence Project received a $451,238 Bloodsworth grant from the Department of Justice. The purpose of the grant is to screen claims of innocence and conduct DNA testing of material evidence in appropriate cases.

“WMU-Cooley’s Innocence Project has almost 20 years-experience in post-conviction DNA testing,” stated Project Director Marla Mitchell-Cichon. “The grant funding, which covers the cost of testing, allows us to be a resource to innocent prisoners and their lawyers. We are honored to assist in freeing Mr. Hamilton.”

The WMU-Cooley Innocence Project has a similar grant partnership with the Michigan Attorney General Office, Conviction Integrity Unit, assisting its office with the evaluation of innocence claims.

Established in 2001, the WMU-Cooley Innocence Project focuses on obtaining post-conviction DNA testing of material evidence, and provides legal assistance to persons who are imprisoned for crimes they did not commit.

The WMU-Cooley Innocence Project is the only post-conviction DNA innocence organization in the state. Since its inception, the office has screened over 5,800 cases and is responsible for the exoneration of four men: Kenneth Wyniemko (2003), Nathaniel Hatchett (2008), and Wayne County residents Donya Davis (2014) and LeDura Watkins (2017).