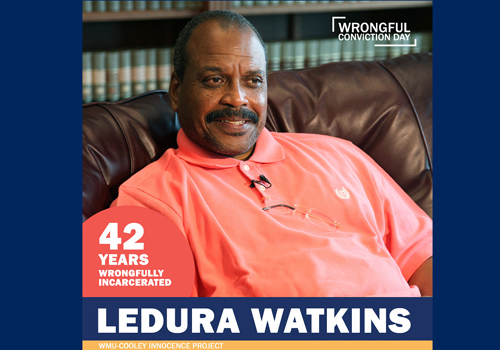 According to the National Registry of Exonerations, more than half of wrongful convictions that we know about involved official misconduct. In murder convictions that later resulted in exoneration, cases with Black defendants were 22% more likely to include police officer misconduct than those with White defendants.

“As we learn and reflect on Wrongful Conviction Day, let’s commit to take action to improve the criminal justice system. Let’s commit to working toward justice for all,” said WMU-Cooley Innocence Project Director Marla Mitchell-Cichon.

This year, the Innocence Network is hosting the first full-day Wrongful Conviction Day livestream from 9am-9pm EST including 15 segments with over 60 guest speakers. Highlights include:

● A conversation about racial discrimination and wrongful convictions featuring Atlanta Hawks Head Coach Lloyd Pierce; Melissa Redmon, Director of the Prosecutorial Justice Program at the University of Georgia School of Law; Jimmie Gardner, who spent 27 years in prison for a crime he didn’t commit; and Georgia Innocence Project staff.

● A discussion between three death row exonerees and Witness to Innocence members—Kirk Bloodsworth, Clemente Aguirre, and Derrick Jamison—about the wrongful convictions that put them on death row and how the death penalty continues to endanger the lives of innocent people.

● And conversations with over twenty exonerated people.

The National Basketball Coaches Association (NBCA) is helping bring attention to the observance for the fourth year in a row. In addition to Coach Pierce’s livestream segment, six NBA coaches have filmed public service announcements for Wrongful Conviction Day:

Members of the public can learn more and take part in the day by: testing their knowledge about the issue of wrongful conviction by taking and sharing the quiz, signing the pledge to demand police accountability, and posting to social media using the hashtag WrongfulConvictionDay and tag @WMU Cooley Innocence Project, particularly during the Twitter Takeover at 2pm EST/11am PST.