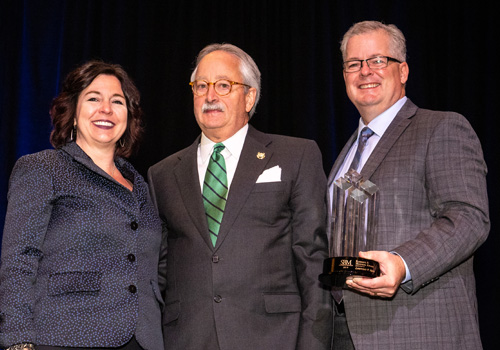 The Hudson Award is presented periodically to commend attorneys for outstanding and unique service to, and on behalf of, the State Bar of Michigan, the legal profession, and public. Nolan’s service to the SBM and the profession are demonstrated through his volunteer service, which began when he was first elected to serve on the bar’s board of commissioners in 2009 and continued as he worked his way up through the executive board ranks, attaining the role of president from 2016-2017.

Nolan has served on WMU-Cooley’s board of directors for 37 years, longer than any other board member.

Chartier was presented the Michael C. Franck Award, which is given by the SBM Representative Assembly to an attorney who has made an outstanding contribution to the improvement of the profession. As partner and litigator with Chartier Nyamfukudza P.L.C., Chartier has represented clients accused of white-collar crimes, such as health care fraud, mortgage fraud, and money laundering, as well as clients accused of drug dealing, terrorism, crimes against the United States, bank robbery, criminal sexual conduct, and homicide. She has litigated and won numerous motions, including recently obtaining a dismissal in a felony drug case in which the police illegally entered the client’s home.

Before working in private practice, Chartier worked at the Michigan Supreme Court for Justice Michael F. Cavanagh, as well as at the Court of Appeals.  She has received numerous awards, including being named one of Michigan Lawyers Weekly's "Leaders in the Law" in 2018 and one of the top "Women in the Law" in 2013.

Burrell, who represents the third judicial circuit in the Representative Assembly, practices with Dickinson Wright LLC. He is a member of the board of directors of the Oakland County Bar Association; is a past-president of the D. Augustus Straker Bar Association and vice president of the D. Augustus Straker Bar Foundation. Burrell was named a foundation fellow of both the American Bar Foundation and the Oakland County Bar Foundation, served as affiliate representative of the National Bar Association, and previously co-chaired the State Bar of Michigan Equal Access Initiative.

Rebeck practices tax law for individuals and businesses at Rebeck & Allen Attorneys at Law in Southfield. In addition to the SBM’s Representative Assembly, she also serves on both the Audit Committee and the Finance Committee for the SBM’s Board of Commissioners. She was also selected to an elite group of attorneys serving the bar’s Diversity and Inclusion Advisory Committee.