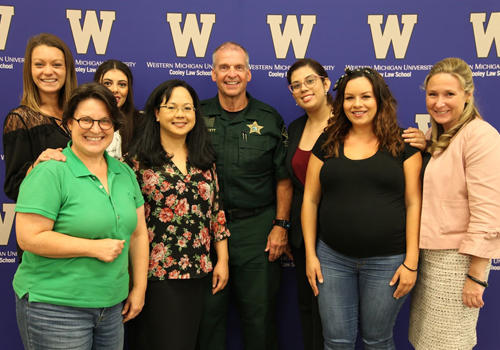 Wilkett, who serves as commander of the Pasco County Human Trafficking Task Force, talked about the signs, behaviors and common indicators of trafficking, including the human trafficking triangle between the victim, trafficker and buyer, and certain populations that are especially vulnerable to being trafficked.

“Victims can be males and females, people who are well educated and those without any formal education,” Wilkett told the students. “Trafficking does not discriminate.”

Serving more than 22 years in public service, Wilkett’s career has included positions in Property Crimes, Major Crimes, Cold Case, Narcotics, Child Abuse, Patrol, and Court Security. He has served as a chief deputy, captain, commander, and director of public safety. He has been recognized as the Pasco Sheriff’s Office Law Enforcement Officer of the Year and was presented the Law Enforcement Official of the Year Award during the 2017 Human Trafficking Summit in Orlando.

Wilkett shared information with the students about how they can become involved with efforts to end human trafficking, and how to help victims and survivors of this crime.

“Western Michigan University Cooley Law School is eternally grateful for the tireless efforts of Corporal Wilkett in the fight against Human Trafficking,” said WMU-Cooley Professor Stevie Swanson, who is also the advisor for HSNG. “We appreciate his dedication and service, as well as his willingness to continually educate the community about this horrendous crime.”

HSNG is a national non-profit organization formed in honor of Morgan Dana Harrington, a 20-year-old Virginia Tech student who was abducted and murdered in 2009. The organization seeks to sensitize young women and girls to predatory danger and fosters mutual respect and camaraderie with young men.